Is Death the Real Answer???

The Crime Scene…
As he lay there in blood, his eyes began to dwindle & he went down the memory lane… Death is peaceful, in spite of the physical pain… he overheard a man “one down” & another man approaching, screaming “here… here” but he din’t wanna live again… what more did life have to offer… except some more pain!
Past…
Jerry had been married to Rene for 12 years… they married young… they were stupid… but till date, they were so in love! They had promised each other till death do us apart & death got better off with them, it seemed… He opened his eyes & saw her in a pool of blood next to him, as the medics removed the knife out of his body & covered his wounds to take him away… he reached out to her hand & held it so tight one last time before the medics actually pulled him away! 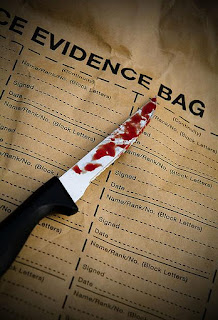 The Investigation…
There were no signs of robbery… no signs of breaking in or force used… seems like the attacker knew the victims well enough… it was not before 4 days in the hospital that he showed signs of recovery… the police questioned him, but he could not remember a thing… how was his wife murdered so brutally… why was he stabbed in the chest… who were they with… he did not remember anything from before 8 hours of his wife’s murder… he did not even remember that he was stabbed & that he opened his eyes & held his wife’s hand before being brought to the hospital… the reports showed signs of date rape in both his & his wife’s body!
The questions…
he could not remember anything … where was i??? what was I doing??? he asked the police… the medics… everyone… it seemed he was going crazy… he said he had vivid dreams that he killed his wife... he kept saying all the time… I killed my wife… I killed my wife… so much so, that he was sent to rehab… but no use… I killed my wife… I killed my wife… it had been 2 months & there were no leads on the case… by then Jerry had tried to kill himself 7 times… & it seemed he genuinely believed he killed his wife… until he was successful to kill himself in the 8th time “to be united with his wife in heaven or hell!!!”
The tipping point…
A night before the kill… Jerry & Rene were out with their old time college buddies… they boozed like they were in college & that’s where they got the roofies in their bodies from too… Allen who had loved Rene from college days was trying to get fresh with her & Jerry could not take the same… He knew Rene loved him but he still could not control his anger & had an unreasonable fight with her on the way back… Rene even apologized to calm him down but that infuriated him even more… he thought that she is apologizing because she was wrong & in a rage of fury he stabbed her over & over & killed his beautiful wife… & when he realized what he had done.. he did not want to live anymore… so he stabbed himself as well… for redemption… no wonder Death was peaceful… no wonder death was more peaceful than living anymore!
Posted by Geeta Ravi at 10:58:00 PM