im a half mallu and half sindi... and this is pretty evident from my (eating) taste and preferences... i have to have a papad (known as cracker or a flat bread in english) when eating, this is purely a sindhi trait and i want it spicy, and love the fish, which is purely a south indian trait... ok, so its also popular with the bengalies! 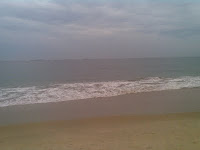 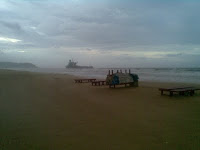 its funny, no matter how hard i try, i do tend to wander... the point is im a half south indian and just like the other south indians, i love the beaches too... ive been to many beaches... some are serene, some hot, some interesting, some fun and some plain dirty... dirty as in unclean, and not dirrrty!!! chennai beaches are at the top of the dirty list... but pondicherry beaches are hot... i mean, you can really not say that you're in india... cuz, you can barely find indians there!!!

anyways, at the beaches, the sand castles and the writing completions before the wave hits... they are still a hit with all the kids and they still seem so cute... i've also seen the weirdest things happening around beaches... one such incident is from about 7-10 years ago...

me and my sister were standing at some beach in Kerala (the one that is right next to the Taj)... suddenly, i heard my pa shout, look out for your sister, there is a huge wave coming... and before he finished his sentence, the wave came at us... i held my sister tight, to ensure she would not flow away... when the wave went past, i turned around to see my father and he was furious... i was smiling at my achievement.. i did not let go off my sister... and then i heard my sister cry.. i looked at her face and said, "it's Ok baby! nothing happened!"... but, she cryingly (if thatz a word) blurted out "it took away my skirt!" *sob sob! 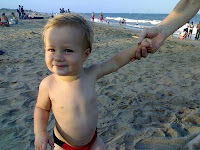 Oh my God! i thought that was really funny but she kept crying.. apparently, it was her favourite skirt! :P we had to convince her that the ocean throws back everything that it sucks in, so it will eventually return to her! the next day, we went to some island on a boat, and she saw a red and blue peice of cloth, and actually got the boat diverted towards the same, but obviously, that wasn't her skirt!

Email ThisBlogThis!Share to TwitterShare to FacebookShare to Pinterest
# Weird Me