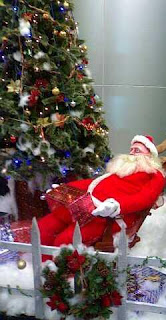 i'm not a Christian, but i do have have a lot of memories associated with Christmas... Infact, when i found out that the Santa who left chocolates and chips near my bed was my father... i was heart-broken.. not literally, but somewhat... i mean, thaz cuz i knew then, that there is no motive of making a wish list anymore!!! :P


when we were in school, we'd have the santa (some senior or some teacher) come on to the assembly place and throw away sweets at the kids... well, our santa was pretty desi.. he'd go ho ho ho but throw pan pasand candies around the school... i mean, with nina seghal taking over, the things really changed, first she replaced the eclairs by pan pasand, then she got rid of our diwali mela and then she put tiles all over the school to make it look like a huge wash room!

anyways, lets come back to the christmas spirit... i've also been mean on christmas... well, i've been mean to many people at many points of time, but its sad that i was mean to someone even on christmas... so, this is how it goes... the family that owns the house right in front of our house sent their children to the christmas get together that was happening at my place... (2 of their own kids and one cousin of theirs... well hello uncle, if i did not invite your kids, its because i dont want to have them at my party... looser... and what's with sending the cousin... i loathed him... we were the same age, and he was better than me in studies and because of him, i'd be shouted at "why can't you do just as well as happy?"... yeah, his name is happy!) ... so, i let them in, cuz i was and still am scared of the uncle's size... i mean, he is as huge as Yokuzuna! i told them that they can stay at the farthest corner of my roof... we played games and they just stared at us... the guy played his guitar, and the 2 girls just heard him... i did not offer them popcorn or cakes or pepsi or samosas or even dinner... and they obviously did not ask for it cuz they were to stay at the corner and were not allowed to come near us! yeah, i know, i was mean... i still enjoy such stuff, i guess that means, i'm still mean! :P 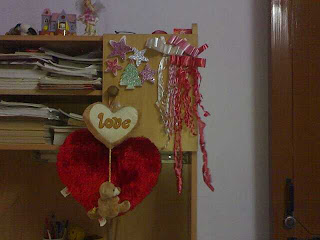 another memory is from asandas chennai... the christmas is a huge hit there... christmas is a hit in the states i know... cuz HP guys get a winter vacation for christmas... what i don't understand is, why is it such a hit with the tamilians??? anyways, the half tree that you see in the pic is from asandas only... the holy was really amazing... it was so nice, i wanted to steal it!!! lol... thankfully, i did not steal the same, but when i sat at the cafe coffee day of that building, i realised that they had cut out peices of thermocol in the shapes of stars and xmas trees... so i asked them if i could have some and when they agreed, i picked up 4 stars and one christmas tree... when i left chennai, that is one thing i carried from there... they sat on my study table for some time and then, when i disposed my table, they went too!!! or maybe, they still are somewhere in my store room... i don't really remeber now!

as i said, i've had some experiences wrt christmas... but this one... is really weird... this tuesday, i caught up on two movies with a friend... one of the movies was "Christmas Carol" yeah! the Ebenzer Scrooge story... i could not have made out that Scrooge was played by Jim Carey, but thankfully my friend made me aware of the same... no.. no.. no.. me going for an animated movie is not the weird part (i do that all the time, wall e and ratatouille are amongst my favs)... whatz weird was that there were a bunch of hooligans in the theatre who actually found a reason to use their dirty minds during the movie... they espically went nuts when Jacob "Marley" was spoken about! all they could talk about is his second name! Bunch of perverts i'd say! :P


chistmas has been weird and funny and entwined for me... lets see what more christmas' have to offer! :P
Posted by Geeta Ravi at 6:05:00 PM

Email ThisBlogThis!Share to TwitterShare to FacebookShare to Pinterest
# Reminiscing, Weird Me