Yesterday was my cousin’s, Kaka (Girish Kumar’s) kachi misri… what’s kachi mishri? Most people here in , call it roka… apparently, it means now we have decided that these two will get married and we are not gonna see any other boy/girl! 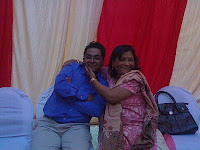 It was a small family affair, but I had one heck of time… I was the unpaid videographer and photographer… and almost everyone in the family was the waiter and the server! Not to mention, kaka himself did do some amount of work… I liked the opportunity of wrapping up the dhulhan’s stuff into a cute little basket just as much.. I really enjoy the chel-pehal in the family that generally drives the wedding families crazy!

While making of the video “Kaka’s kachi mishri”, I realized that there are things (cute little things) that the elderly remember about you, which you can only know just because they told you the same… that’s when I overheard my pa’s story… he said, when I heard about kaka getting married, this is the first thing that I remembered!

After hearing the whole story again (because I have heard it before as well), I realized, my family has very fond memories of Kaka… some of them date back to when I was just born… he is 2 years elder to me… and apparently, he and his family came over to see the just born (that’s me, we are talking about)… he came and went into the other room where I was sleeping… he insisted that he would not wake me up.. so he elderly sat and chit chatted in the other room…

it had been some while since he was in the room that I was sleeping.. and the best part is, he actually did not wake me up.. but suspicion arose because Kaka was/is known to be pretty naughty.. so everyone comes into my room and guess what do they see… kaka with all the shampoo, hair oil, body oil and body lotions.. all on the floor… with a piece of cloth… looking up and shining so bright at mine n his folks… “Kaka, tu yeh kya kar raha hai?” (kaka, what are you doing?) “Chapaee kar raha hu bua, Chapaee!” (im cleaning up the place aunty!(kaka had a slurr, so he called safaee as chapaee))
Posted by Geeta Ravi at 4:37:00 PM

Email ThisBlogThis!Share to TwitterShare to FacebookShare to Pinterest
# Family, Weird Me